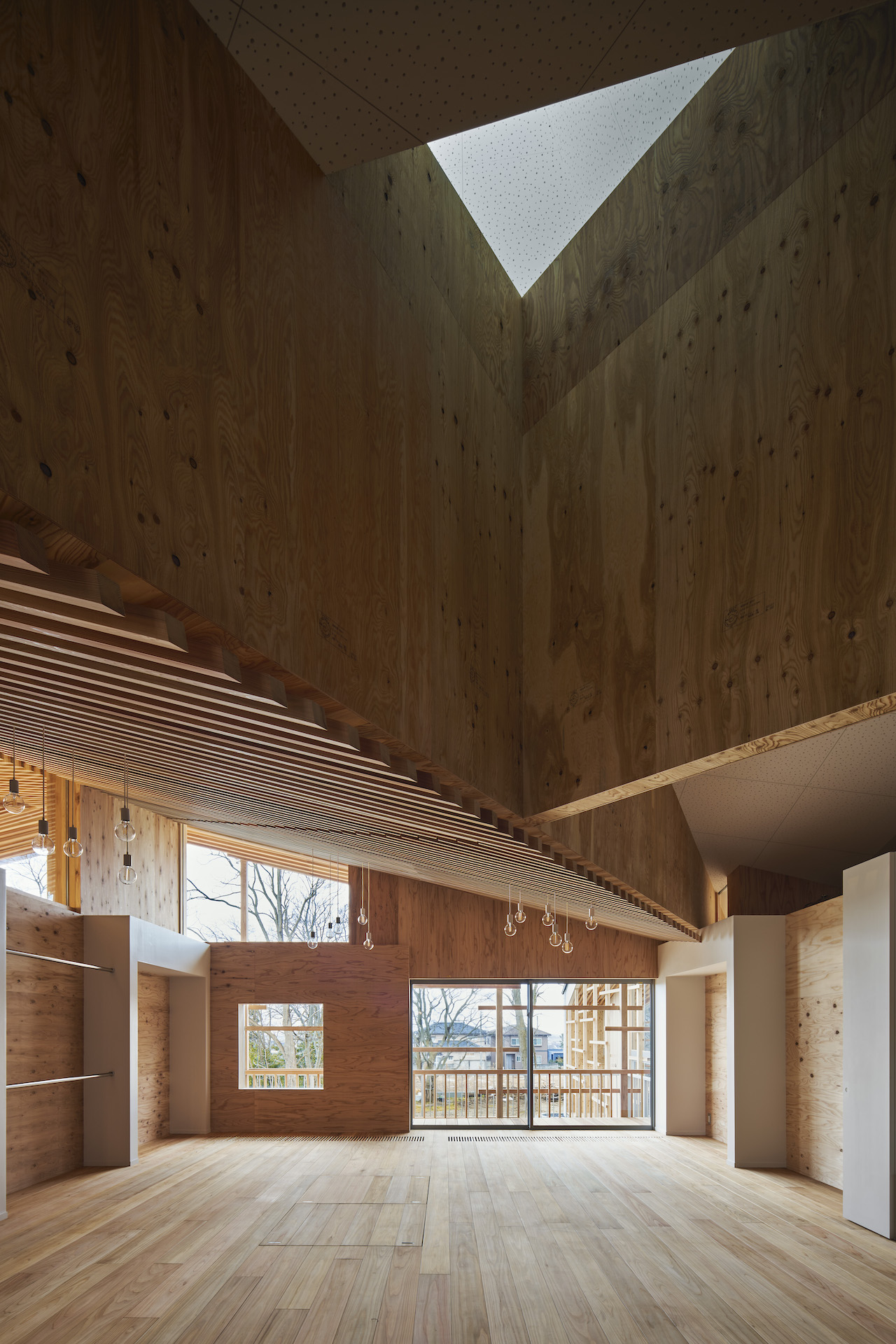 The Center for Early Childhood Education and Care (nursery school) aims to achieve the principles of engaging “naturally with nature”. Located at the end of a winding pathway atop of a sand dune, this single-story wooden building provides a diverse base for children filled with characterful rooms and recesses. The "construction of a large childcare environment" that extends beyond the nursery rooms, the building, and the nursery yard to the surrounding area as a single continuum, and the "establishment of a mutually watchful relationship” in which the whole village is a part of there for the children's learning and play, and while the children revitalize the village. That is what was aimed for. Who or what is this nursery school for? Childcare researchers and workers, parents, and local residents held a series of workshops to discuss the benefits of reconstructing a nursery school on the suburban site. With an aging population and declining birthrate, emphasis was put on how a nursery school could benefit both the children and the surrounding area. The participants concluded on a vision "to create a nursery school like a village and foster a village like a nursery school. The "vaguely bounded, expanding nursery school” would allow children to move leisurely between interior rooms, exterior playgrounds, and the village itself. Additionally, the nursery school could be open to villagers as a place for community interaction and visitations. Under the site conditions, large timbers were prohibited from being transported, and so wooden trusses were built on the field by combining small timbers to create large nursery spaces. Trusses with apexes facing up and down are combined to create a series of truss roofs. Moving the intersection of the trusses from the top of the partition walls allows for a more expressive environment in each of the rooms, while an open space above the partition gives them a sense of connection. The winding, narrow streets that characterize the village are drawn into the nursery school and made into exterior corridors that continue to the back of the building so that the children's smiling faces will appear as if they are in the village. A childcare support office and deck plaza are situated in front of the building, which will be used for local farmers' markets and food truck events, mixing community activities with nursery school activities. In addition, air conditioners and total heat exchangers are installed under the prefectural cedar flooring, creating an underfloor air chamber, so that children are not exposed to direct airflow, but radiant heat works on their bodies, creating comfortable conditions for learning and play. As time has passed since the nursery school’s opening, encouraged by the fluidity of the cross-sectional layout of the grounds, children have socialized more between their age groups. Additionally, as the children spend more time outside, the number of senior citizens out for a walk watching them has increased. Under the eaves of the nursery school building, parents engage with one another between drop-offs and pick-ups. This "vaguely bounded nursery school " is creating flexibility and expansion in children's learning and play, responding to everyone's wishes and beginning to create a new everyday life in the village. It seems that the very seeds of " creating a nursery school like a village and fostering a village like a nursery school" are beginning to sprout.